Architect-went-full-time-illustrator Maja Säfström and her partner Daniel Widman live with their two kids in an old falu-red apartment building in the western Stockholm suburb Bromma. A sunny but breezy morning, we crashed their cozy family hang out and had a chat about sleep caves, apple peaches and winning birthday traditions.

When they don’t practice idyllic hygge-style family-life, Daniel runs the architect studio Lowen Widman Arkitekter and Maja is the brilliant mind (and drawing hand!) behind a bestselling compendium-series about animal facts and the accompanying Instagram account @majasbok.

Tuesday evening ends:
At 9 PM if I fall asleep with the kids. Otherwise pretty late, i like to sit and draw something and then its hard to stop before midnight.

Before turning off the lights:
The lamp on my side of the bed broke a few months ago, and I still haven’t fix it. So no need to turn it off. Sometimes I sketch in the dark.

I sleep in:
I prefer naked, but I usually wear a t-shirt for protection against my 1,5-year-old daughter. She is a nipple pincher.

On my nightstand:
My phone and my notebook. That kind without lines. It’s for doodles. And a bottle of “välling.” The latter is a (disgusting tasting) thinner version of porridge that Swedish parents love to give their kids before going to bed. It makes them _not hungry_ all night which is nothing but genius.

On my husband’s nightstand:
Architecture books and a novel, at the moment “Educated” by Tara Westover. Sometimes it feels like he put things there to look intellectual. But he really does read a lot. I give him that.

My best tip for a good night’s sleep:
People say it’s really good to work out.

My version of counting sheep:
To go to bed and try not to fall asleep. I never heard someone sharing this concept, so maybe that makes me UNIQUE!!! I have so many ideas in my head. So I try to organize them as much as I can before sleep comes and takes me! Absolutely not writing anything down, so most of it is unfortunately gone forever the second I fall asleep.

I last dreamt about:
I was attending a wedding and a friend came and was super pregnant with triplets. Asked her about it and she started crying. Felt so bad because it ruined her makeup!

My evening beauty routine:
Washing the face and putting on a random cream. Meaning the one that first catches my eye in the bathroom. With that said, I buy extremely many creams. I don’t have the patience to stick to a routine for more than maximum 1,8 days.

Favorite bedroom feature:
I love the cave-feeling in our bedroom.  I think it’s how humans have always slept? Tight, cozy, and dark? With that said, sorry that it was impossible to get a good *crisp* picture in there!

Wednesday morning starts:
Estrid wakes me up and we walk downstairs. In that very moment she always wants an apple. But what she really wants is a peach, so if you give her an apple she will be really pissed and try to throw it on the floor.  Then I go upstairs and try to get Wille out of bed but he is a real sleeper so usually I end up snuggling him for a while until Daniel tells us both that we really need to get up.

The first thing I see:
Estrid looking me straight in the face and, not to brag but, it’s not unusual that she says “äska mamma” (I love mom). He he.

Everyday breakfast:
It really depends on how badly in a hurry we are. The perfect breakfast has fruit (but definitely not pears, who eats that?) newly baked bread, and coffee with oat milk. I kind of saying oat milk to sound like a good person. I often also drink it with normal cow milk, to be honest.

Birthday breakfast:
There was a small initial competition between my family tradition and Daniels when we first met. Let’s just say mine WON! In my family the birthday person gets a tray with the following things:
Hot chocolate with hand-whipped cream in the most beautiful cup the household offers. A piece of birthday cake. A candle. A flower, ideally from the garden. And, I would say, minimum three gifts. Entrance song: ‘Ja må han/hon leva.’ And yes, no one actually feels like eating cake or drinking hot chocolate the moment they wake up, so it basically never happened that the birthday person touch either of them but they serve a very important symbolic value.

A dreamy weekend morning:
Ok, you asked for dreamy, here we go: Daniel wakes up first and takes the kids downstairs and prepare breakfast with them. I wake up 30/45 min later by the sound of them laughing in the kitchen. Put on a robe, feel the smell of pancakes and coffee as I walk down the stairs. The moment the kids and Daniel see me their eyes turn to hearts and we all hug and the birds sing through the open window and…ah, that’s about it! Could not ask for more!

Morning beauty routine:
I go to the bathroom, do some damage control, is the makeup from yesterday still on? If not – great!  If yes, I might wash it off with some lotion-ish-substance. And then I often wash the face with freezing water. It’s not exactly pleasant, but the feeling afterward is hard to beat! And then depending on the weather, I will put on some makeup. If I don’t have a meeting that day and the temperature is more than 20°C then I’ll just put on some moisturizer.)

My do’s and don’ts when making the bed:
Can’t say much about making the bed because it seldom happens but one rule that Daniel tries hard to implement in our home is to not sneak into the bed in ”daytime clothes.” Apparently, it’s not very hygienic. But sometimes the situation just asks for it.

What’s going on with your toilet door:
Haha! well. We bought that door on Blocket (a very notorious digital marketplace in Sweden) because it fits the house so well. The original door was brutally replaced in the 60’s by a really ugly flat crappy one so we wanted to fix that. But it has a glass part which is a bit “problematic” for a toilet. So I decided to make it a bit more private in there by making an illustration on the glass. The text says ”knacka, pappa bajsar” which is Swedish and means ”Knock first, daddy is pooing.”

Which space (in your house) will you illustrate up next?
I have. Many plans. For illustrations. At home!! Next I want to make an illustration on our dishwasher because I think its so ugly. But I am not sure it’s such a good Idea.

Also, we just have to ask… where do we find that butter tool of yours?
Ah! We got it as a gift from Daniels dad. My guess is that it’s a flee market find. But if I’m pretty sure I heard that it’s called “fatty”, if one would like to do some own research.

Sunflower seeds are planted, the floor is painted pink, and the shelf systems revolutionize an indus… 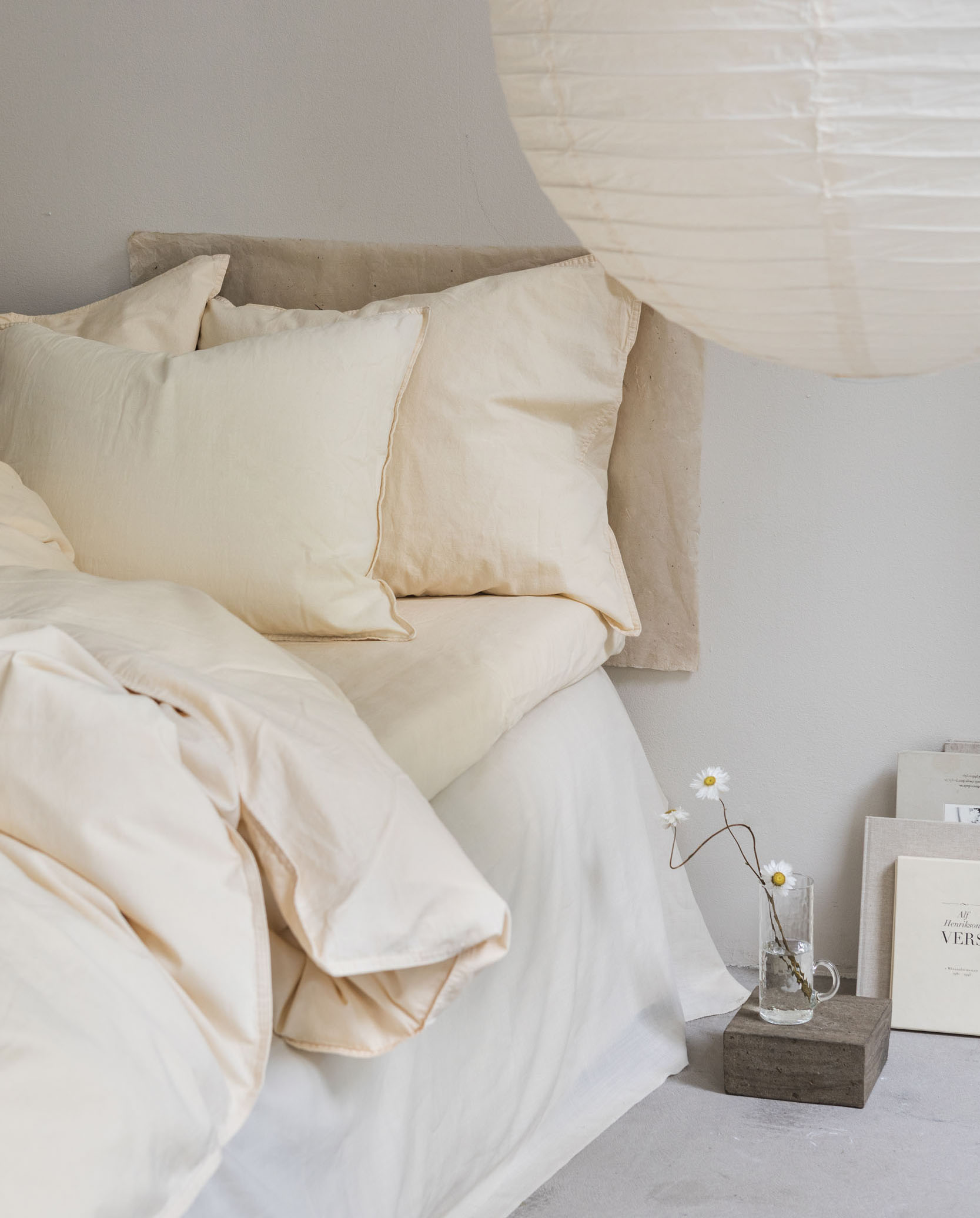